Profits are the motivation for business activity and ultimately the means through which firms can continue to exist and grow.

The Profits Perspective is a view of the economy that focuses on the flows of funds that determine total business profits. It is rooted in the profits equation, an identity derived by Jerome Levy in 1908. It is also closely tied with the work of Hyman Minsky, a 20th century economist.

Profits are obviously important to the behavior of the business sector, yet they are often ignored in economic forecasting. Profits are the motivation for business activity and ultimately the means through which firms can continue to exist and grow. Therefore, changes in profitability are key to understanding decisions that the business sector will make on employment, output, and investment in the future.

VIDEO: David Levy explains where profits come from at TEDx

Economists often create models of the economy with simplistic assumptions about behavior and with rigid, abstract rules governing economic processes. Such models do produce precise results that are provable in terms of the models’ assumptions. However, the price of “solvability” is the great distance between the models and reality. The Profits Perspective puts reality first. The Profits Perspective is not a set of simultaneous equations—it is not a closed model of any kind. Rather, it is a dynamic framework that takes into account any and all important influences on economic performance that the user can identify, and it reveals their impact on profits and future economic activity. The foundation of the Profits Perspective is the equation for total business sector profits, which is also called “the profits identity.” Economics, as popularly practiced, ignores the question “Where do profits come from?” The notions of profits and profit maximization permeate theory in microeconomics, but when the subject is the entire economic system, profits strangely vanish. Yet, there is a clear, exact answer to the question “Where do profits come from?”

The Prevailing Wisdom Has It Wrong

One basic view, the neoclassical paradigm, has to an extraordinary degree monopolized macroeconomic thought during the past fifty years. It has dominated macroeconomics as taught in colleges and graduate schools, as employed in business economics and as applied in public policy analysis. It has been the basic framework shared over the decades by Keynesians, monetarists, supply-siders, and other groups of economists. In the neoclassical paradigm, profits do not exist, or rather, they continually gravitate to zero. The assumptions that profits equal zero at equilibrium and that the economy continually approaches equilibrium produce a definition of profits that is very different from the definition accountants and business people use. In the real world, where economic performance is continually changing in level and character, swings in profits from quarter to quarter, year to year, and even era to era are vital aspects of the story. Economic practitioners involved in business cycle or macroeconomic policy analysis tend to be heavily influenced by the academic tradition in which they were educated. Therefore, when they do address the issue of total business profits, their macroeconomic theory is of little help. Many resort to generalizing from microeconomic analysis, and, in doing so, frequently commit the logical sin known as the fallacy of composition—assuming what is true for one individual is necessarily true for all individuals together. For example, analysts widely cited cost-cutting through job elimination as a positive force for profits in the early 1990s. Yet, the macroeconomic impact on profits was not so simple. Every job eliminated also represented lost personal income and lost consumer spending; that is, it represented lost business revenue as well as reduced expenses.

A Perspective That is Broad, Adaptable, and Powerful

The Profits Perspective, unlike more common macroeconomic frameworks, encompasses not only flows of funds (profits, GDP, personal income, and other “income statement” concepts), but also levels of assets and liabilities (real estate, P&E capacity, inventories, debt, stock market capitalization, and other “balance sheet” concepts). Thus, the profits approach facilitates analysis of the effects of economic activities on household, corporate, and government balance sheets and conversely, the impact of changes in balance sheets on profits and economic activity. 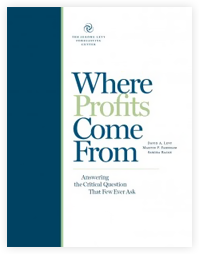 “I learned to pay attention to the connections between economic theory and daily events by watching my father [Jerome Levy] investing according to his theories on the interplay of capital spending, profits, and the course of the economy... [L]ong after Dad died, I continued to turn to Jay, and then David as well, who have turned Dad’s ideas into a set of tools for making economic predictions.”

“I have followed the work of the Jerome Levy Forecasting Center for well over a decade and have found it a uniquely valuable and insightful resource. The Center's dual focus on the sources of profits and the effects of financial activity on the economy substantially differentiates the analysis from traditional Wall Street macroeconomic research. As an aid to me in anticipating economic events and formulating investment strategies in these turbulent times, it stands heads above any other research available.”

“Mainstream economic theories are not adequately explaining consumer and government behavior in this cycle. Wall Street practitioners are thus turning to alternative theories, and the Levy-Kalecki formula—independently developed by New York physicist-entrepreneur Jerome Levy in 1914 and Polish economist Michal Kalecki in 1935 and then unified by American economist Hyman Minsky in the 1960s—is helping to better elucidate the relationship among debt, savings, and profits.”

“I have followed the Levy forecasts for 45 years. If I had to make do with only one tool to help me succeed, it would be the insights of the Levy Forecasting Center.”

“[Jay and David Levy’s] predictions of the decline and fall of the economy have been right as rain. Father and son, they’ve been at this game a lot of years, and while not infallible (a quality restricted to popes and financial journalists), they have a truly extraordinary record of being right.”

“[T]he key determinant of [economic] system behavior remains the level of profits. [My] financial instability hypothesis incorporates the Kalecki-Levy view of profits, in which the structure of aggregate demand determines profits.”

Hyman Minsky, seminal 20th century economist whose financial instability hypothesis has gained popularity in the wake of the financial crises of recent years. Often overlooked by his admirers is that the Profits Perspective was at the core of his analysis.
READ OUR PUBLICATIONS
SEE OUR CLIENT SERVICES
© [year] The Jerome Levy Forecasting Center, LLC. All rights reserved.